The Old Man Of Surin 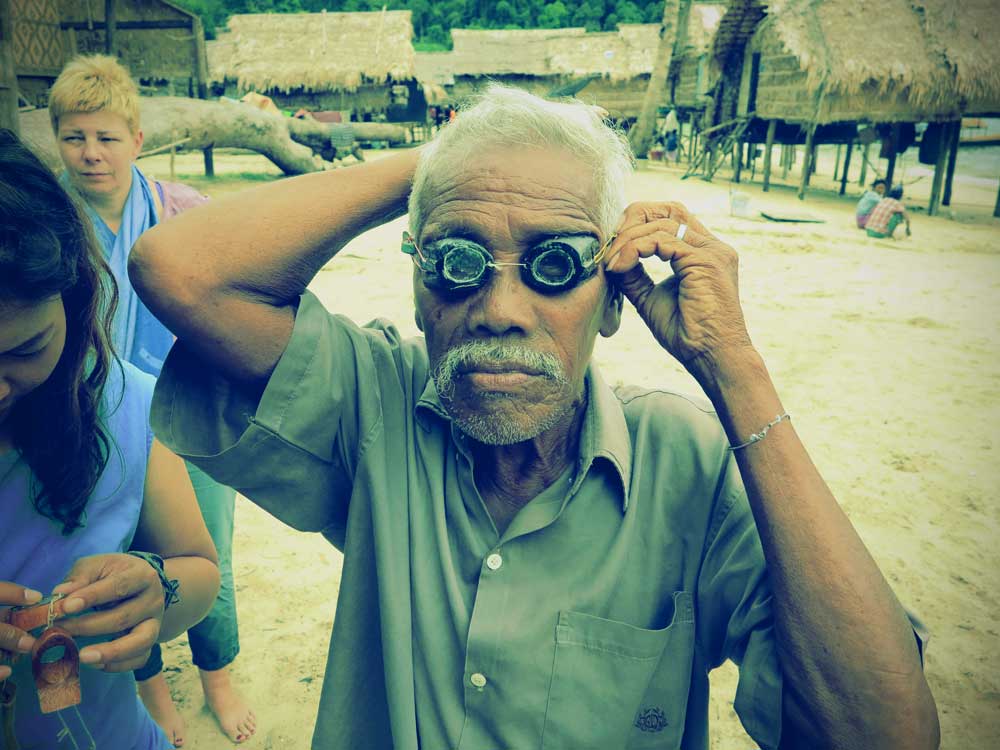 19 Dec The Old Man Of Surin

Posted at 00:40h in Moken by Ralph Scheider

If you ask him how old he is, he can’t tell his age but he is sure he is over 80 years old. He is of an older generation, a time not so long ago when his people would sit around camp fires telling the stories of their past. The wonderful tales of mermaids, turtles, snakes, monkeys, spirits and ghosts. The traditional folk tales of the Moken. For he is their Shaman.

He also left the Surin Island three years ago when his wife became sick.

Now that his wife has recovered he has returned to the Moken village on Surin Island. He is the oldest resident in the village. He was born on the Surin Islands and he is called Selemat.

After not seeing him for three years I had the pleasure to met him once again on my first Surin snorkelling trip of the 2015-2016 season. Though he only speaks a little English he did manage to tell me he is bored of eating fish everyday. So, on my next trip to the Surin Islands I brought some chicken and rice for him and his wife.

During my visit he showed me his goggles, hand crafted by himself for the Moken fishermen. Goggles they could use to help harpoon fish.

I think I will continue to deliver chicken and rice once in a while. It’s a pleasure to see him and his wife happy and stay more healthy. He has an infectious, happy demeanour. It’s easy to smile with him when he shows his toothless grin, even though you might not fully understand what he is smiling about.

Selemat represents an older generation of Moken. He remembers a time of greater freedom, a time of bountiful oceans and a much simpler life for his people. He is original Moken.

As the Moken learn to adapt their way of life to modern times they rely on visitors to buy their traditional carved boats and trinkets. This helps the village earn a living. Though the boats are no longer the large versions they used to build, it helps keep the people from having to seek employment on the mainland. The Moken have never had much interest in the mainland, they are people of the sea.

A more in-depth view of Selemat and the Moken of Surin feature in the award winning film by Olivia Wyatt.

Couldn't have hoped for such an unforgettable snorkel experience! Friendly staff, fun snorkel mates and, above all, we've seen pretty much every species you... view more

Check out our new website all about Khao Lak. It's packed full of useful information and features many Khao Lak tours